There was a good turnout on a lovely moonlit evening for a hilly night navigation course. Click on any image to show them as slides.
The next night nav will be sometime in March. Some competitors' comments:

Note to self for next time, bring a brighter torch ... [to] reduce the need for fence and wall climbing. Watch out for the time penalties!

I think we spent more time last night not being completely sure if we were in the right place than on any other nightnav!

Back in the day, when all DMC members were young and athletic, it was customary to have a large turn-out for the Dovedale Dash, on the first Sunday in November each year, the date being chosen to coincide with the muckiest conditions underfoot, and flood tide in the River Dove.

There was an even bigger turn-out in the George at Alstonefield afterwards, but we can't all be athletes.

Whatever; the glory days of the George are long past, and the word 'glory' never applied to the knackered climbers of the DMC dragging themselves through the mud.

But the mud is still there, the River Dove is still deep and cold, and a few sad nutters still drag themselves out of bed on a foul Sunday morning to trail along behind the serious people who take this kind of thing at face value. Once it was a challenge between the Oread Mountaineering Club and the Derby Mercury Cycling club to see who was least fit; the inevitable happened and pantomime horses and waiters with trays of drinks competed, and everybody had a lot of fun. Nowadays, though, fitness is a serious (and lucrative) business, and much too important for mere idle pleasure, so we all behave like adults. 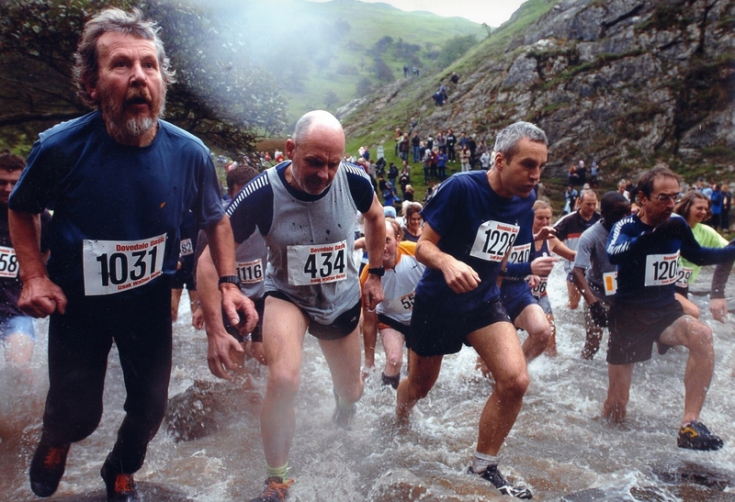 The course starts in the meadows at Thorpe, descends Lindale to the Dovedale Stepping Stones,which are ignored in favour of the river, and meanders around for 4 miles or so,at which point it arrives back at the Thorpe side of the Stepping Stones, and the original quick dash down from Thorpe Meadows becomes a last gasp stagger back up to the finishing line.

So we come to 2018, and the DMC presence is down to four, out of a total entry of 1342, but since we all put our bodies on the line, not to mention in the river, it seems only right that I should revive an old custom and record the finishing times and positions. To give you some kind of yardstick, the course is about 4.8 miles and the winner this year did it in 25minutes, 41 seconds, which is the second fastest ever, I believe. You won't be surprised to hear that he wasn't one of ours.

But, BUT a far from disgraceful time of 30.41 was recorded by Ed, who ended in 30th position, and if you've seen Ed run you'll gather that the first 29 were going a bit. Next up was Andy, in 44.02 and 541st position, so a bit of work needed there, old duck, but it isn't as bad as it sounds, because he did manage to beat Helen, who recorded 45.19 and finished 622nd, and if you can beat Helen, who's young and enthusiastic and doesn't hang about, there's still some hope left before the decline into decrepit old age.

Which brings us to my own performance (you see what I did there) and a less than impressive 51.50 and 930th. Nowadays beating the hour mark and coming in the first 1000 is a cause for celebration and a small glass of tonic wine, but in my defence I did come 48th of the Over 60s, and most of them are just kids in their sixties and early seventies.

So a good time was had by all; the last person home finished in 1.26.39; and nobody drowned, or at least hasn't washed up on the shores of the Humber yet. And nobody went for a drink afterwards. How times change.

PS. If, like me, you last did the run a few years ago, then you undoubtedly followed the plan developed by the master tacticians of those days like George and Alistair. With 1400 people involved, the slow queue to cross the finishing line and receive your certificate began at least a hundred yards back - right at the start of the last serious steep bit in fact. Therefore you could use up the last reserve of energy for the 200yards prior to that, pass several people who were saving it up for the last hill, and join the end of the queue with a smug grin, because YOU knew you could walk slowly up that last hill. Tactical genius, or what?

But, alas, technology has moved in; your race number bib carries a chip, finishing position is recorded electronically as you cross the finishing line, and so there's no queue. Nobody told me about this, so in the old style I cleverly passed half a dozen people by knackering myself before the last steep bit, only to find NO QUEUE.

So I had to stagger up the last climb whilst being passed by all the people I'd just passed and a few more besides. Up in heaven George and Alistair must have been falling about.

So, now I've talked you into it, on November 3rd 2019, as you toil in the rain up Lindale from the Stepping Stones, just remember to keep a bit in reserve for the last steep 100 yards, and reflect how much better things were in the old days, as I may have mentioned before. 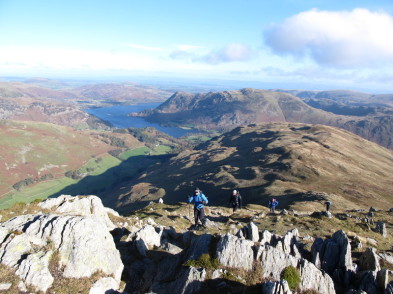 It was a glorious sunny weekend accompanied by an Arctic Blast. Many Lakeland Fells were visited on both days by different members, typically 18 km with 1500m of ascent.

No one blown away!

Cath Sinclair was awarded the George Fowler Cup at the club's annual dinner for all her unstinting work throughout the year, welcoming new members to the club, introducing them to the climbing wall, partnering them on the wall and imparting the values and etiquette expected of the membership. Andy Neath presented the award last week. 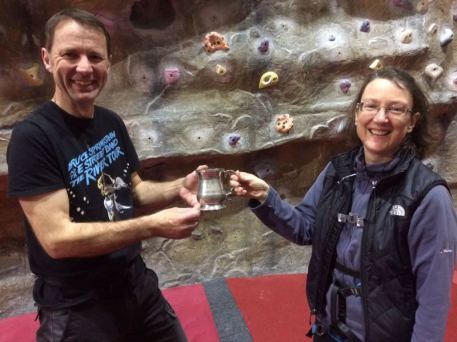 The camping barn was in a fantastic position between Reeth and Gunnerside. It was a very snowy weekend but four of us did an excellent 10 mile walk taking in historic lead mines and blizzards. 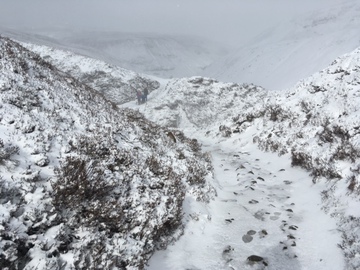 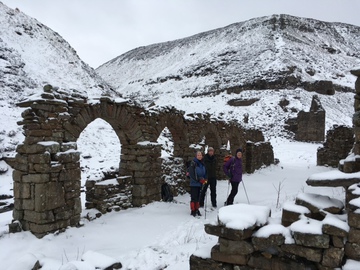 Originally there were 5 of us but Mick had a bout of flu and Christine’s car broke down and couldn’t be repaired until the following week. Mike D was about to become a grandad so was grounded in Matlock. That left Pete, Laura and David to battle the Scottish elements, joined by Roger for the weekend.

Also in the hut over the weekend was a party of 10 on an English-Polish climbing exchange week. Most of the party didn’t arrive until the small hours of Saturday morning but it was interesting to hear them planning climbs over breakfast of grade 6 and 7 in Glencoe – just as a warm-up to start the week! 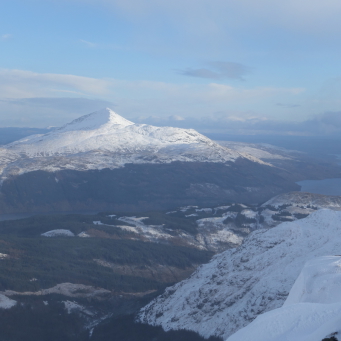 Saturday Pete, Laura and David drove out to Victoria Bridge and climbed Stob a’Choire Odhair. The day was grey and got greyer as it progressed, finishing in a squall and snow storm as we approached the summit. We quickly abandoned our plan to descend via the W. ridge and retraced our steps. The small hut at the bottom of the glen (Glasgow Climbing Club) was occupied for the weekend by two brothers and nephew.

Sunday we were joined by Roger for a climb of Ben Vane. In complete contrast to the day before, Sunday began bright and clear. Snow conditions were quite loose but from about 700m it was cold enough to have formed a crust to stop us sinking to our knees at every step. The wind increased as we got higher producing significant spindrift and the cloud closed in. There was no view from the summit but as we descended, retracing our steps, the clouds lifted to give extensive views over Ben Lomond and looking west, out to Mull. It was a good day with some short scrambly bits to add interest.

Photos: Ben Lomond from Ben Vane, on Ben Vane itself and at the summit. 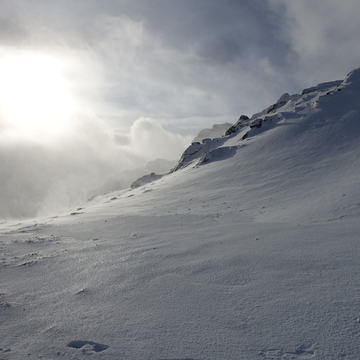 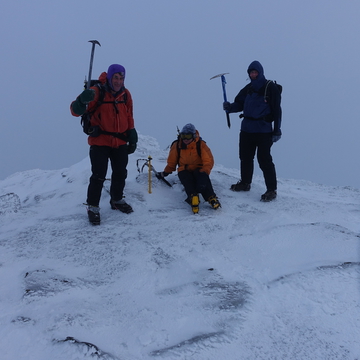 Richard arrived on Sunday evening for a few days, a member of the ‘Wokandrice’ (I kid you not) Club to do some walking and cycling.
Monday a route up Beinn Chabair was abandoned by Pete and Laura due to dire conditions under foot of loose snow on top of bog. David remained in the hut feeling sorry for himself after a dodgy curry the night before.

Tuesday the day began cloudy but the summits were clear. Laura, Pete and David headed down to Loch Awe to climb Beinn a’Chochuill and Beinn Eunaich. There was a lot of loose snow, thigh deep in places on the S ridge up to Beinn a’Chochuill so progress was slow. Higher up, where the ridge had cleared a bit and a good crust formed, the going became easier. Large patches of clear blue sky developed which meant a good view from the summit into the northern walls of Ben Cruachan. Time was getting on so we made a rapid descent to the col followed by an ascent of Beinn Eunaich, hampered by a quick snow storm halfway up to remind us who was boss. There were no views from the summit but the clag was only hovering around the tops. We made a descent of the SSW ridge and the steep W face back to the track.

Wednesday’s snow and high winds arrived as predicted making it a rest day. The same was forecast for Thursday but early morning weather produced false optimism and talk of Ben Narnain. However by 10 the weather had deteriorated and the talk was more about abandonment. Pete and Laura decided to try for the Corbett of Meall an Fhudair but had to bail out after reaching the top of the ridge of Troisgeach but David was already well down the M74 by then.

Had three good days on the hill and some enjoyable conversation in the hut. It was a pity that more couldn’t have made it.

12 DMC members celebrating in front of a cheerful fire and toasting the arrival of 2018 with sips from a rare bottle of Shackleton’s Whisky (courtesy of Austin who sadly was unable to join us). We were lucky to enjoy 2 days of good weather, walking the local fells, valleys and exploring the slate quarries. 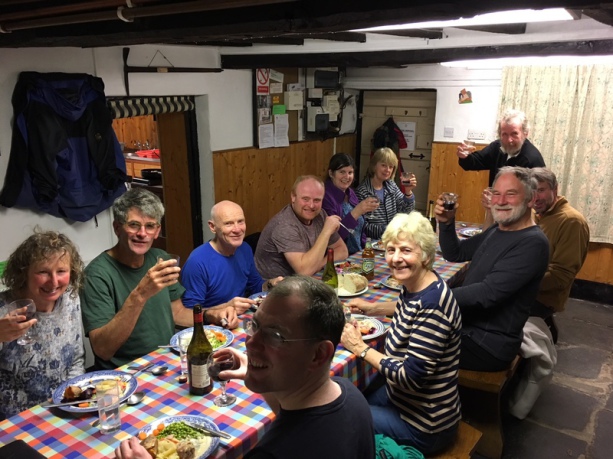 If you're longing for some warm rock, there are some sunny pictures from Kalymnos in Autumn 2017, courtesy of Jon Harrison.