News and Articles from 2017 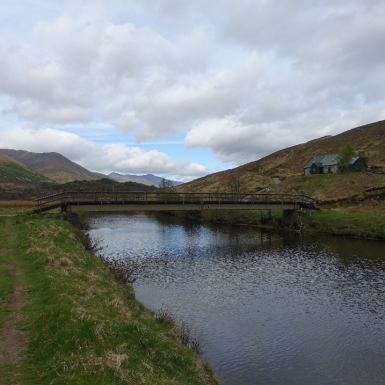 For this year’s May meet the DMC were based at An Teallach MC’s Strawberry Cottage at the western end of Loch Affric. The remoteness of the hut – it’s 5 miles from the Affric car park down a track – and the restrictions on access to only two vehicles, meant for a certain amount of organisation. There were 8 booked for the meet but Ed had caught a virus and Mick had sadly to attend the funeral of his oldest friend and DMC member John Baxter of whose death we learnt on the Friday.

The plan was for all to meet at the café in Tomich on Sunday afternoon then drive to the car park. However, Mike and Dave who had driven up on Friday to Killin, arrived late after a quick morning ascent of Meall Buidhe in Glen Lyon, thus we all met at the car park. Pete and Laura transferred their gear into Gill and Chris’s camper and then cycled off down the track while we followed in car and camper.

Nobody was prepared to ford the River Affric in front of the cottage as suggested by the joining notes, so gear was ferried the remaining 200 metres over the bridge to the cottage.

Strawberry Cottage is a comfortable hut with power supplied by solar panels and water provided from a tank at the back, filled by pumping water from the river at which Pete proved to be expert. No hot water or shower but a flush toilet at least provided some sanitation. 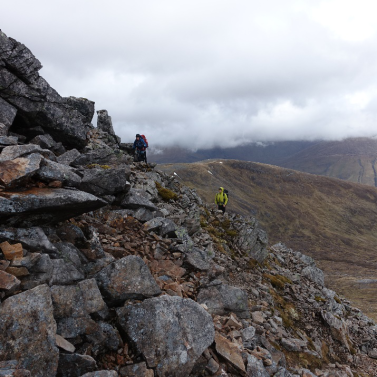 The forecast for the early part of the week was not promising, with heavy rain for Monday and continuing high winds and showers on Tuesday.

During Sunday evening, Chris, Gill, Mike and Dave discussed a plan to walk around the 8 Munros on the north side of Glen Affric over 2 ½ days leaving on Monday afternoon. Monday morning didn’t turn out to be as bad as threatened but we all stayed around the hut expecting the worst. Finally, the backpackers left mid-afternoon to walk up the Glen towards Affric Lodge and then over the top to camp in the upper part of the glen below Tom a Choinich. Meanwhile Pete and Laura cycled down towards the youth hostel at Alltbeithe to climb Ciste Dubh.

Tuesday started cloudy but soon cleared, although winds remained strong. The backpackers completed the four Munros on the ridge from Toll Creagach to Mam Sodhail, whilst Pete and Laura took the direct route up Mam Sodhail and continued to Carn Eighe and Beinn Fhionnlaidh where in descent, they met up with the other team going up. Pete and Laura returned to the hut and the backpackers carried on to camp at the bealach below An Socach. 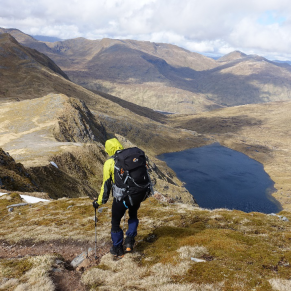 On Wednesday, the day started bright but soon clouded over though the wind had died down and the tops remained clear. The round of Munros was completed with An Socach, Sgurr nan Ceathreamhnan and finally Mullach na Dheiragain. Most of the gear was left in a tent at the bealach and only day packs were carried. Meanwhile Pete and Laura cycled in to complete the same 3 munros.

Mike and Chris decided to take a rest-day on Thursday but Gill and Dave, though weary from the previous three days, went off late morning in bright sunshine down Gleann na Ciche for a relatively easy day to climb Sail Chaorainn. Pete and Laura had already set off with a plan to climb Mullach Fraoch-choire and A’Chralaig but decided it was too good a day and took the opportunity to bag Sgurr nan Conbhairean and Sail Chaorainn too.

We headed out on Friday but only a mile from the end, the track was blocked. SSE were repairing cables, the last of 49 breaks, that had been laid to take power from the new hydro scheme in the Glen. Luckily the delay was only short and we were on our way again in 40 minutes. A great meet in an idyllically sited hut.

Brilliant weather for the DMC walk from Derwent Dams, Abbey Clough, Back Tor and back via Lost Lad: 10 miles.
9 of us : Mike, Kris, Sally, Pete, Alan, Gill, Christine, Richard and Dave. 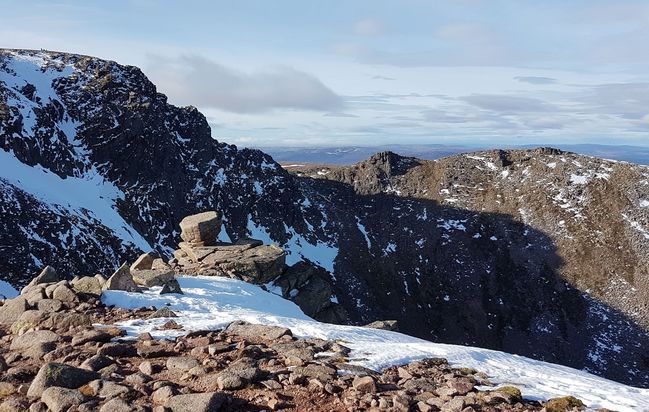 This year the winter meet was held in Aviemore at the FRCC hut, Karn House. Located in a housing estate to the north of the village, it seemed an unlikely base. However, it was comfortable and well-appointed and a reasonable drive to our destination hills. Seven of us turned up on Wednesday evening, February 15th.

In contrast to last year there was little snow when we arrived and even less when we left. The main feature of the weather was strong or gale force winds from the SW. Although there was an overnight frost on Thursday night, in general the freezing level was high and the limited snow cover continued to melt through our stay. There wasn’t a lot of rain but the summits were often in the clag. We got out every day and ticked a decent number of Munros. 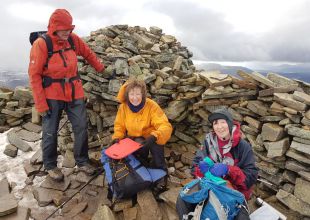 Mike and Dave had climbed Ben Chonzie from Killin on their way up to Aviemore, so they hit the ground running on Thursday with an ascent of Meall Chuaich to the east of the Drumochter Pass. The rest of us decided on a shorter day with an ascent of Meall a Bhuchaille, a shapely Corbett close to Glenmore Lodge. Mick (accompanied by Jackie) made the top in a ferocious storm and retreated back the same way. Setting off later, Chris and Gill together with Pete and Laura passed Mick on the way up after the storm and had views from the summit before continuing down to the beallach and back through the forestry. 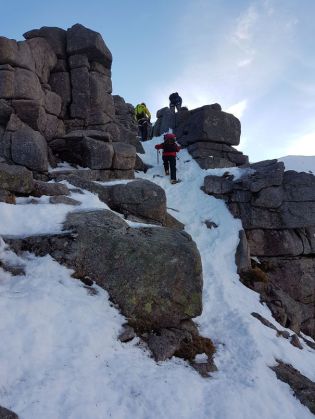 Friday was sunny and there was good neve on the climb up the Fiacaill Ridge between Coire an t’Sneachda and Coire an Lochain which Gill, Chris, Pete and Laura tackled. It is a mainly straightforward scramble, but Gill and Chris put the rope on to climb the crux chimney to follow the ridge direct for a couple of pitches, while most parties bypassed this on a ledge system. We continued to the summit of Cairngorm and enjoyed great views. Meanwhile Mike and Dave ascended Sgorr Gaoth in Glen Feshie, from Auchlean and Mick climbed Geall Charn, A’Mharconaich and Beinn Udlamain – Munros to the west of the Drumochter Pass. Here there was thick cloud on the summits, but otherwise not unpleasant.

The hut reached capacity over the weekend as a group of Oread’s arrived, climbing in Coire an t’Sneachda and Coire an Lochain, together with other users, but we managed to survive the temporary chaos.

On Saturday Gill and Chris were joined by Ellie Roddick for an ascent of Mullach Clach a’Bhlair from Glen Feshie. This was a fairly boring summit reached on a tedious track, so we also pulled in Sgorr Gaoth and enjoyed clear views from its spectacular summit with a dramatic cliff plunging down towards Loch Einich. Mick was also in Glen Feshie knocking off Munro Tops: Meall Tionail, Meall Buidhe, Geal Charn, Creag Mhigeachaidh. 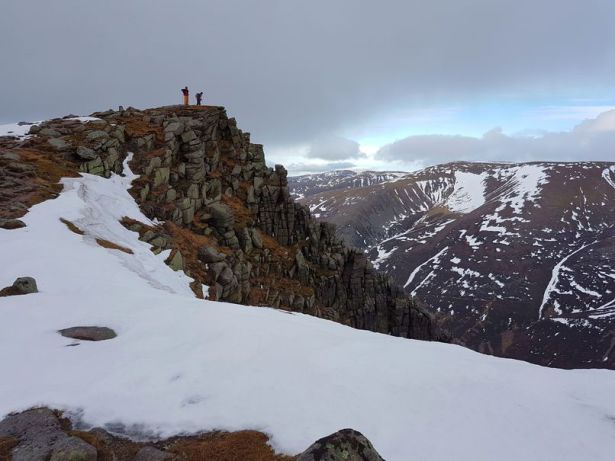 Sunday found Mike and Dave again at the Drumochter Pass ascending A’Bhudiaheanach Beag and Carn na Caim from Balsporran Cottages. Mick did the whole of the Glenmore Ridge: Craiggowrie, Creagan Gorm and Meall a Bhuchaille (again). Gill and Chris went to the Monadhliath to climb A’Chailleach and Carn Sgulain.

Monday was dull and wet, so we all headed home. Later in the week Storm Doris moved in and dumped a load of snow in the area, but it has been an unusual and variable winter in Scotland. 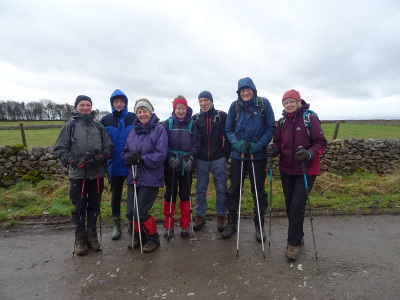 The DMC After Dinner Walk was a pleasant if very muddy outing uphill and down dale around Sheldon where we had a very enjoyable llunch before heading home. As you can see Richard took a mud bath quite early in proceedings! 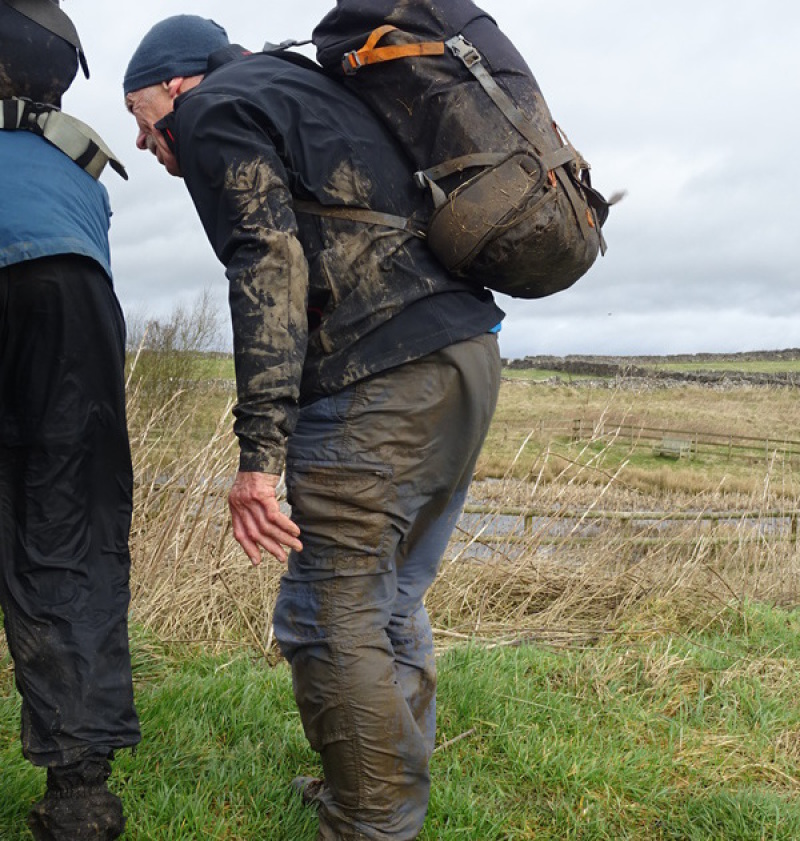 The event was started from the Sycamore pub, and the participants had to find 30 points using a 1:5000 map. The route was down to the group but most did between 8 -10 km depending on their route choice.

The weather was kinder to us this year compared to last, during the Wirksworth Urban night navigation when the heavens opened for the whole three hours, the evening was chilly and a little foggy but not wet.

All had to be back at the Thorn Tree Pub by 10pm with their answers, some debate was had re where the circles had been marked on the map (3mm out in one case eeek!)

Everyone enjoyed the event and were ‘buzzing’ when they arrived back, some competitiveness was demonstrated and the majority got correct answers and completed the course.

Well done everyone. Thank you for supporting the event in such numbers. 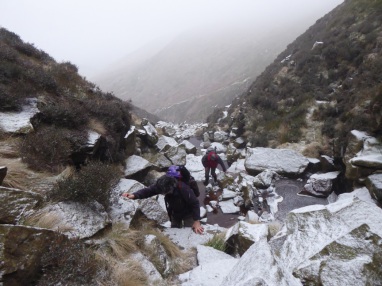 Eight people turned up on what started being a lovely day.

We started the walk from Upper Booth in the Edale valley, walked through the fields to Crowden Clough. The weather was fine until the start of the scramble up the stream. When it started to snow, We clambered up the clough but had to abandon the steepest part as it was iced over and we did not have the appropriate equipment. We did not do the squeeze at the top because of the ice. Unfortunately the fog had come in so instead of going to Kinder Scout or the downfall we changed direction and walked along the edge past the Woolpacks which were quite eerie in the foggy snowy light. 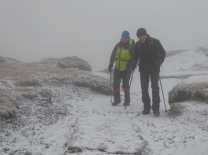 We followed the path round to the top of Jacobs Ladder where we had a quick lunch ducking down behind an wall out of the wind. We completed the day going over Brown Knoll which has now been fully paved, (Mike informs us that each flagstone cost £75-£90 each and then there are the personnel and helicopter costs, but if this stops extreme erosion it is worth it). We dropped down to Dalehead and back to the cars by 3pm.

A good day was had by all, thank you for supporting the day event, and hopefully we will have more on our next weekend or day walk.