Lockdown Lock-ins at the Derwent Arms 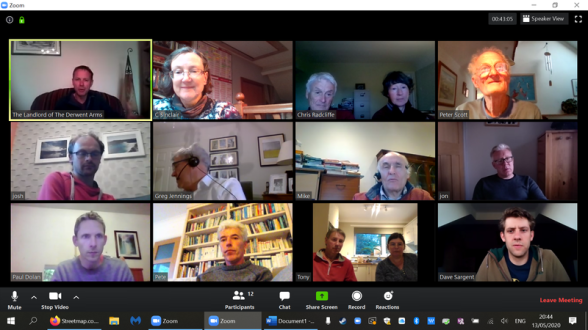 There's not been much happening in terms of mountaineering and climbing over the past couple of months but no doubt club members have been getting their exercise in suitably social-distanced, individual walks, runs or cycle rides.

One club event has bucked the trend, though, and that is the weekly virtual pub meet at the newly-opened Derwent Arms, courtesy of pub landlord, Andy. 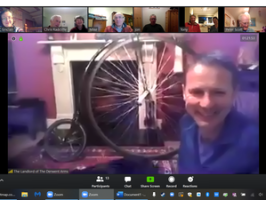 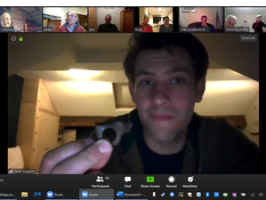 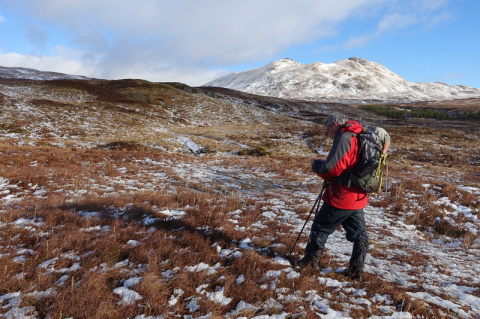 Five members attended the meet: Pete and Laura, Mike D and David A arriving on Sunday evening and Mick B the following day.

Monday was true to the forecast with strong winds, and squalls of rain, hail and sleet making all but low-level walks impossible.

Mike and David decided to go in search of crossbills in the woods around Dalrigh below Beinn Dubhcraig. The summit could be seen, apparently temptingly close, between showers but the birds were more sensible than to be caught out in this weather and Mike and David returned to the hut without a glimpse.

Pete and Laura also walked in the shelter of woods but in those closer to Crianlarich. 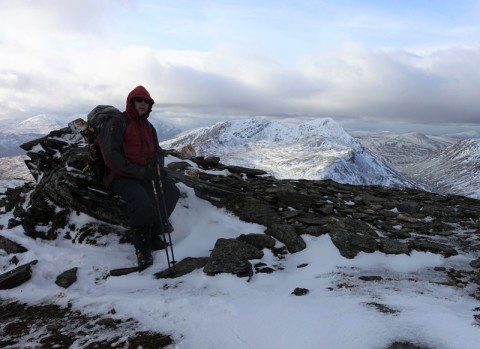 Tuesday was a better day and Pete and Laura went to Bein Chabhair with more success than the last Crianlarich meet when they were beaten back by deep snow and the short day.

Meanwhile, Mike and David went down the road to Meall Glas, walking in much better conditions than 18 months ago when they climbed the other summit of the pair, Sgiath Chull.

Mick went off to Beinn Dubhcraig by a novel route, following the River Connonish before striking south through ‘horrendous bog’, as he described it, to the summit.

Tuesday night we were joined by ‘’John, John and Paul (no George or Ringo)’’ from Liverpool. They proved to be interesting company for Mick the following afternoon, who had decided to spend the day in the hut.

Wednesday, Mike and David decided to test Mick’s description of Beinn Dubhcraig but took a more conservative approach along the path beside the Allt Coire Dubhcraig. After Monday’s birding disappointment, today they were to be rewarded by the sight of a snow bunting on the final ridge up to the summit. After about 10 minutes on the summit, the return journey down the ridge proved quite difficult as a gentle wind had suddenly risen to gale force, making it difficult to stay on their feet.

Also today, Pete and Laura tackled the most ambitious route of the meet, driving round to Glen Lyon to complete three of the four Munroes in the horseshoe, having skied up Carn Gorm on previous trip. The descent from Creag Mhor was by compass bearing in thick cloud. 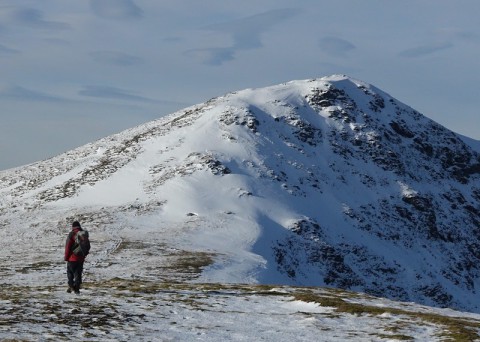 Thursday, the final day of the meet, was the best day weather-wise, with clear blue skies and no wind. Mick B climbed An Caisteal from the hut while the rest of the party went to Loch an Daimh, at the western end of Glen Lyon, to climb Stuchd an Lochan.

The car parking is already at 400m so this was supposed to be an easy day, especially for a couple of members who were feeling a bit off colour. However, once the top of the ridge had been achieved and the first top of Creag an Fheadain reached, it became obvious that the summit was still a long way off with another small top in between.

Having reached the summit cairn however, the views to the Ben, the Grey Corries, and beyond to the Cairngorms  were well worth the effort, and as Mike and David were sitting out of the wind, some wisps of cloud floated around providing enough cover for a Brocken Spectre. A glorious end to a great week.

Thanks to Mike for arranging the meet and to all for their company including John, John, Paul (no George or Ringo.) 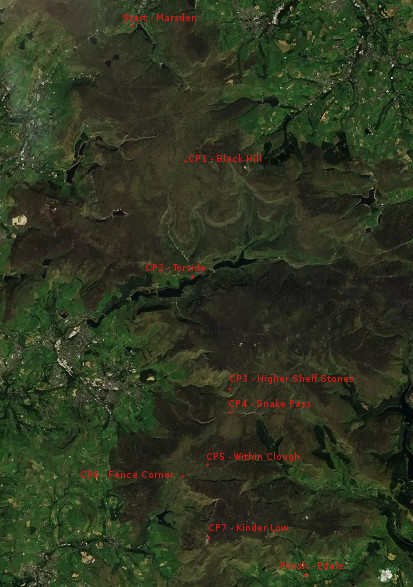 On Sunday 12th January, I stood near the back of a group of about 180 runners at Marsden Cricket Club, about to embark on my third successive year running in the Trigger Race, from Marsden to Edale.

Organised by Nicky Spinks, the Trigger is something of an iconic 25-mile fell race through the Peak District. The race varies in distance each year depending on the location of checkpoint 5 and how good your navigation is. The weather is invariably marginal - to - poor in mid January and since the route eschews the Pennine Way as much as possible, good navigation skills are essential. This year saw a cold front passing over during the day so it was basically raining, a bit breezy, quite cool and with a cloudbase at about 500m.

From Marsden to Wessenden Head the route follows a track and this is probably the easiest section so it's worth trying to go at a reasonable pace. After crossing the A635 there are some awkward flagstones (so slippery when wet) and a couple of streams to cross. I slipped in one of these and hence got an early soaking.

From just after the top of Black Hill, a small trod cuts across the top of Sliddens Moss down to Crowden Little Brook. It was about waist deep to ford the stream and tricky to fight the force of the water. Clambering out onto a rock on the other side I was then able to offer to catch the runner behind me so he could jump across.

At Crowden the route normally crosses a footbridge between Woodhead and Torside reservoirs but with the bridge closed this year, the route was diverted west around Torside and up the Pennine Way. It was about here that I encountered the first of The Spine Race competitors who started from Edale that same morning.

Leaving the Pennine Way at the top of Torside Clough, I followed a compass bearing across difficult terrain to find the trig point at Higher Shelf Stones. The top of Bleaklow was in the cloud so, even with prior knowledge of the area, a compass is essential here. Bleaklow is one of the few areas in the UK where you can find mountain hares and I was lucky enough to disturb one as I traversed the cloughs. Due to the mild winter its coat was only a mottled grey rather than snowy white.

After Higher Shelf Stones it's an easy section across Snake Pass. From the A57 the route briefly follows the flagstones of the Pennine Way then dives off left to find the 'wandering' CP5. The location of this checkpoint varies each year and for 2020 it was at the bottom of Within Clough, where it meets the Snake Path from Ashop Clough. Within Clough makes for awkward running but a bit of advice from another runner saw me heading down the left-hand side of it. The going is still tricky here - distinctly 'swampy' - but I did find myself moving slightly faster than some other runners on the right-hand side so the advice I got was right.

After leaving Within Clough and CP5 it's an uphill battle past the aircraft wreck to the fence corner. I always pity the mountain rescue team members who man the Fence Corner checkpoint. It's always really exposed there with nothing but a bit of tarp attached to the fence to provide them any protection. The next section follows the western edge of Kinder. At the 'Downfall'  the water was flowing upwards in the strong breeze to create a fountain. My right leg always yells at me after about 20 miles so I took a second painkiller at this stage before reaching Kinder Low.

If you're feeling good at Kinder Low, it's probably a little bit shorter to follow the southern edge of Kinder to Grindslow Knoll but I prefer to take a direct line trod from about Noe Stool steeply down to Jacob's Ladder and then follow the Pennine Way into Edale. I finished near the back of the field of competitors but that's fine by me; it's just a fabulous race to compete in. Many thanks to Nicky for organising it and to all the Woodhead MRT members who provide the support. 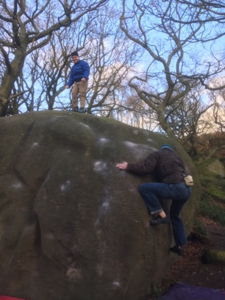 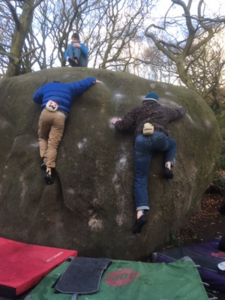 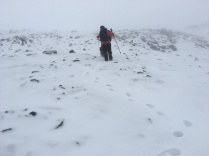 In better conditions, on the way up to Coniston Old Man, Mike Dowsett and David Aldridge stopped for lunch at Goats Hawse with a fabulous view overlooking Goats Water. They reached the summit but the wind was too strong and slippery on neve to continue any further so they backed off and returned to the hut by traversing the back of Dow Crag to the Walna Scar Road. 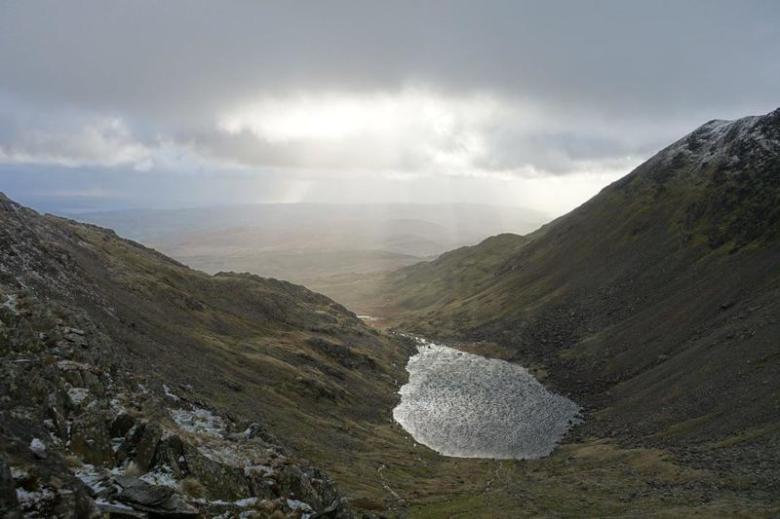 The meet had a great attendance with 22 members, young and older, enjoying a fabulous pot-luck supper on Saturday evening. The
weather was excellent: very windy, with snow on the summits on Saturday and snow down to the hut level for Sunday's walk up Harter Fell.

The club held its AGM on Thursday 14th November. After completing the business of the meeting, a sale of various gear items raised £115.35 which was donated to the Edale Mountain Rescue Team.

The October meet at the Oread Hut in Rhydd Ddu started rather wet, but it cleared during the morning and a large group climbed Yr Aran from Nant Gwynant (reached by bus from Rhydd Ddu) and then returning down the quarry track back to Tan-yr-Wyddfa. Everyone contributed to a pot-luck supper on Saturday night - a hugely successful social occasion. Bright and breezy weather on Sunday saw parties walking on the Nantle Ridge and on Mynedd Mawr. 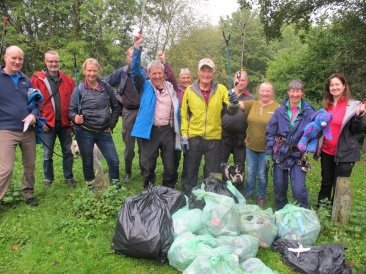 On Sunday 22nd September, the DMC joined forces with Greenpeace to help clear litter at Black Rocks. The area is a popular tourist attraction, especially for climbers and walkers, offering some superb views of Cromford and the surrounding countryside.

On this occasion, small clumps of pink cyclamen could be observed amongst the deciduous trees, which was a beautiful sight on a rather damp and cloudy day.

Climbers from the DMC were able to use ropes and scramble down the crags and gullies to recover many items of litter, which sadly had been thrown over the edges. Greenpeace and walkers helped by collecting litter from the base of the crags and nearby footpaths. Compostable bin bags were supplied by Greenpeace, which were much appreciated, and fitted in well with the whole ethos of caring for our environment and recycling.

Nearly 30 bags of rubbish were collected, mainly single use plastic bottles followed by beer tins and glass bottles. Finally, the local warden arrived from the District Council to disburse of the numerous bags of rubbish.

Black Rocks has had a deep clean! 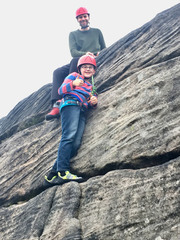 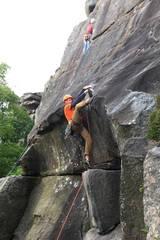 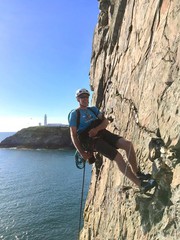